In 2006, Code Geass made its debut as the greatest mecha anime of all time, but the show has so much depth in the way a story is told, and in its characters, Code Geass ultimately becomes a cult-hit in anime history. The director behind Code Geass is finally making a comeback with a new anime named Back Arrow, and this might be time to revisit the mecha era.

Director Goro Taniguchi is teaming up with the Kill la Kill, Promare, and Gurren Lagann writer Kazuki Nakashima to work on their latest anime series Back Arrow, which will be affiliated with Aniplex and release in 2021.

As a veteran mecha anime director, Goro Taniguchi will be streamlining the anime in the mecha direction with the central character Back Arrow, who can summon giant mecha machines known as Briheight. Previously, the anime was supposedly set to be premiered in January. However, the date was not finalized, and a new date was fixed, which is January 8th, 2021. 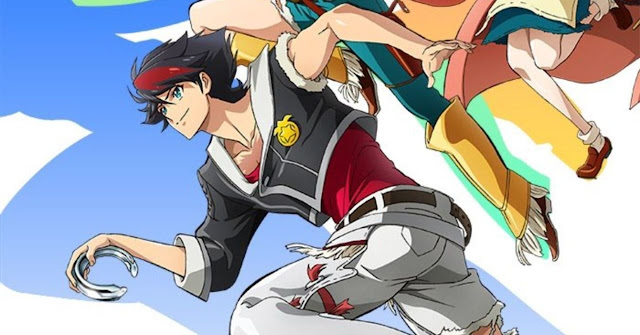 The latest tweet confirmed that the show would begin streaming from January 8th weekly. The new promo looks impressive, and it is not far from the truth that the animation quality is top-notch. The visuals look colorful, and the characters look promising. After all, Goro Taniguchi is directing the anime, so the anime will inevitably look gorgeous. One more thing that needs to be pointed out about the promo is the characters.

The characters in the promo look young and promise a better character transformation that might be the same as Lelouch from the Code Geass series. The latest tweet also shared the cast and characters who’ll be playing the leading role in the anime.  Kunihiro Kawamoto will be playing the role of Burk Lean, Tomokazu Seki as Sola Athin, Reina Ueda as Annie, Sara Matsumoto as Jim, Anna Nagase as Tom, and Maria Naganawa as Sam.

Story and plot of Back Arrow

Unlike Code Geass,  Back Arrow’s story will occur in a village surrounded by a wall similar to the plot of Attack on Titan. The people inside the world will be unaware of what’s outside, and identically to the Attack on Titan plot, the life inside the walls will be secluded from the world’s development.

The concept of walls will be unraveled when an outsider appears inside the walls. Back Arrow will claim that he has lost his memories. As the story develops, Back Arrow will start to remember that he came from the veneers’ outside world. Back Arrow, to reclaim his memories, goes further and beyond to fight what is precious to him, and in the process, he will uncover the hidden secrets of the walls hidden from the insiders for the longest time.

The characters, plot, and situation might seem that the anime will be a rip-off of Attack on Titan. Still, Goro Taniguchi is known for his unpredicted plot twists in Code Geass, and Back Arrow seems like a show that will be the most underrated anime of 2021, joining the ranks of Attack on Titan season four, The Promised Neverland Season 2, and The Rising Of The Shield Hero. My Hero Academia: Who Is Better Between Overhaul and Shoto Todoroki?
Did You See the New Look of Captain Marvel (Game Version)?
Chainsaw Man: Cliffhanger Teases the New Life of Denji
Comment on this post
Newsletter
Follow me
Search
my blogs