My Hero Academia has several heroes that are powerful enough to rival the strongest protagonists of Shonen anime. Even the prestigious U.A. school students are so skilled that they are on par with the Pro Heroes and even villains. Although they are still in training, they must not be underestimated. Mirio Togata was one such hero student who was considered better than some top Pro Heroes. Unfortunately, he lost his powers when he fought alone with the yakuza. But there is another student who is sometimes overshadowed by the struggles of the protagonists, even though he deserves much more attention. Son of the current hero no. 1, Shoto Todoroki had a tough childhood, but he has grown up to become a valiant fighter who can challenge any villain.

Despite being in training, Shoto’s skills with his Quirk are exceptional, and he seems like an outlier among his peers. But what if he were to fight with a powerful villain from the series? Who would win? The most challenging villain for Shoto will be Overhaul. He has a strong Quirk that will test Shoto’s unique Quirk and push him to his limits. 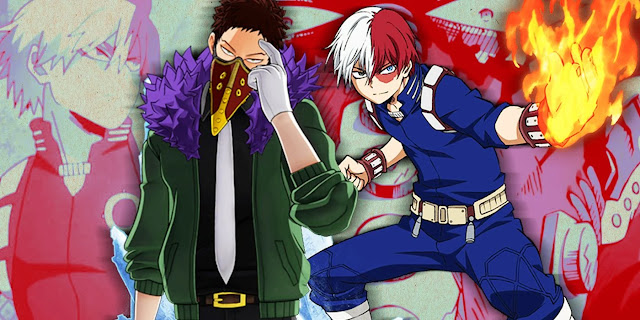 Shoto is lucky to have inherited the right combination of Quirks from his parents. His mother, Rei, had an ice Quirk, while his father, Endeavor, is the flaming hero. Endeavor married Rei with the expectation that one of their children will get a combination of their Quirk and then fulfill his lifelong dream of becoming the hero no. 1. It turns out that his father’s prediction was right, and Shoto was inherited with the powerful flames from one side of his body while the other side creates ice. The two complemented each other and gave Shoto immense powers that made him a strong candidate for becoming the best hero.

However, his powers did have their limitations. The fire half of his body can cause heat stroke, while the ice half can cause frostbite. However, he had the option of continually alternating between the Quirks, which would take care of both the downsides. It means that Shoto’s Quirk is also self-regulating if one is mindful of its use.

Whenever Shoto has fought, he has proved to be very skillful in the use of his Quirk. The villains and heroes have struggled to put up with his quick and agile tricks. Not only does Shoto have a powerful Quirk, but he can think on his feet. He also has a great understanding of his opponent’s weaknesses and knows how to exploit them for his advantage. So, overall, Shoto is a powerful future top-hero who might even become the hero no. 1 someday.

Overhaul’s Quirk allows him to reshape and rearrange matter with just a touch. He even uses it to heal himself and even regrows his body parts. He can use anything around him for defense by rearranging and reshaping it down to its molecular level. In fact, his power even allows him to fuse his body with someone else’s to become stronger. There are no limits to his powers when it comes to offense. He can use anything and reorganize it to the molecular level in order to use it as a weapon. Overhaul is a dangerous villain who is not afraid of using any means necessary to take on his enemies. His powerful Quirk gives him immense powers to fight with even the top pro-heroes.

The hypothetical fight will probably start like most of Shoto’s fights. He will use a barrage of ice to overwhelm Overhaul, but it would hardly worry him. Overhaul will easily be able to reorganize the ice and attack Shoto right back. Shoto can use either ice and fire half to counter the attack. The fight will likely continue this way for a while until Shoto starts getting tired. Even if any of Shoto’s attacks hits overhaul, he can heal himself in a moment. Shoto’s fire will not be of much use since Overhaul creates a defensive wall to protect him from such attacks. However, Shoto will struggle to deal with Overhaul’s attacks. He can reorganize the entire ground leaving Shoto no solid surface to stand upon while he constantly throws sharp projectiles. A critical blow will eventually hit Shoto, and Overhaul will win.

Code Geass Director Reveals Promo of Back Arrow Anime
How To Access Hacking Mechanics in Cyberpunk 2077
Did You See the New Look of Captain Marvel (Game Version)?
Comment on this post
Newsletter
Follow me
Search
my blogs