The shooting of the upcoming movie Scream 5 has officially wrapped—the fifth installment of the horror movie franchise is directed by Tyler Gillett and Matt Bettinelli-Olpin.

Scream is a horror media franchise consisting of four movies. Wes Craven directed all the films and stars Courteney Cox, David Arquette, and Neve Campbell. The franchise collected a gross of $608 million worldwide. The movies follow Sidney Prescott and her war against Ghostface’s murderer, who stalks and torments the victims. The movie’s first project is the first highest-grossing slasher film, after whose success the team has created three more films for the franchise.

For many years there have been rumors that Scream 5 is under work, and it was great news for the audience when Spyglass Media Group bought the rights to the films. The franchise has confirmed that Neve Campbell, Courtney Cox, and David Arquette will reprise their characters in the upcoming movie. The film’s shooting took place in Wilmington, North Carolina, under the safety protocols of COVID-19. After around two months, the movie is officially wrapped.

The movie’s plot follows a young woman who comes to her old hometown and encounters horrific murder cases connected to an infamous killer, Ghostface. After the death of Craven on 30 August 2015, the franchise’s fate was uncertain. In March 2020, Tyler Gillett and Matt Bettinelli-Olpin were signed to direct the fifth installment. 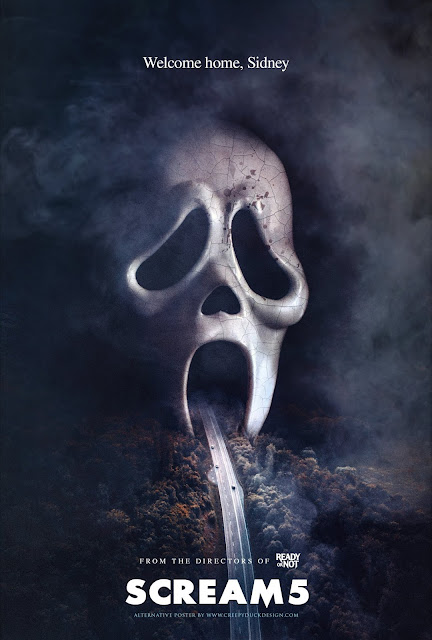 Producer Kevin Williamson announced that the shooting of the film has wrapped. The post includes the pictures of the title treatment of the film and the director on set. The title is simply written as “Scream” with the infamous Ghostface mask. A few weeks later, Williamson also confirmed the release date of the movie.

His post reads: That is a wrap on Scream, which I am excited to announce is the upcoming film’s official title! Nearly 25 years ago, when I wrote Scream and the director’s screenplay, Wes Craven brought life to it. I could not imagine the lasting impact of the franchise.

He also wrote that he is excited for you to return to Woodsboro and get scared again. He believes that Wes would be proud of the movie that Tyler and Matt are making. He is thrilled to be reunited with Marley, Neve, David, and Courteney to be working alongside a new filmmaking team.

Williamson continued to be grateful for the fantastic newcomers’ team who have come together to continue the late director’s legacy with the franchise’s upcoming film. He would see the audiences in theatres in January 2022. #ScreamMovie @ScreamMovies.

Before releasing the Scream 5 trailer, the team has shared some behind the scenes photos from the set. The PR team teased its audience with another collection of Ghostface photos with a Jack-o-lantern carved with the killer’s face in the director’s chair.

Scream and Scream 2 received critical acclaim. The film series got several awards, including MTV Movie Award for Best Female Performance for Campbell, a Saturn Award for Best Actress, and Saturn Award for Best Horror Film for Scream. The past performance of the franchise has been very spectacular. Fans were suspecting that the studio might fix a release date of September or October, which is a more popular time to release horror movies. However, it is exciting that the team decided on a date for January 2022.

The upcoming movie, the Scream, is the first project without Wes Craven. The new directors and writers have introduced some new characters and storyline with the original fight off Ghostface (or it could be Ghostface’s). There is still a long period of more than a year left for the movie to release. Hopefully, the studio will soon release some more images or teasers of the film.