While it was fun to watch Dabi’s smiling face as he revealed himself as Touya Todoroki, the big reveal’s impact was not as big as everyone suspected. The My Hero Academia anime fan base already knew that this was going to happen. Although, the reveal didn’t have any impact on cold-hearted manga readers.

In chapter 285, The League of Villainswas advancing to victory, and the heroes were struggling to keep up with the fight. There were many instances where the show’s protagonist Deku lost the balance, but thanks to Bakugo and Shoto’s teamwork, the trio could hold off the villains for a while. 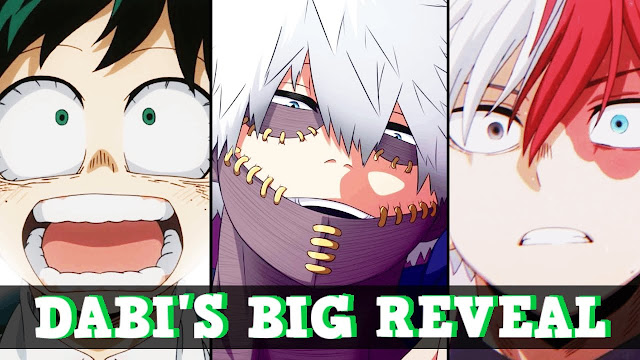 In chapter 289, Bakugo received a lot of damage to his vital organs and was forced to retreat from the fight.

The Paranormal Front Liberation War arc is moving towards its end, and the latest chapter just revealed the biggest mystery about Dabi but all at the wrong time.

Those who are following the manga already knew that Dabi was Todoroki. The manga chapter 252 dropped massive hints about the Todoroki family past and how Dabi might be connected to the Shota Todoroki and Endeavor.

Another hint fans might have missed is the Dabi’s quirk, which is the manipulation of fire, the same quirk both Shota Todoroki and Endeavor uses in fights.

All of the hints and guesses suggested that Dabi was all along Touya Todoroki, and the latest chapter revealed Dabi’s past and why he was hiding behind that name.

Although the reveal might change everything for the story, the current Paranormal Liberation War arc was enough to keep the manga running.

The reveal timing was off, and while the fight is still going on, there was no need to add the Dabi/Touya revelations to the current situation. It doesn’t make any sense!

The cheesy TV broadcasting about the reveal also felt unnecessary and didn’t add anything to the plot.

In chapter 290, Dabi nationally broadcast himself about his reveal. But If you think about it, there was no need to use a TV in the middle of a war because guess what? Nobody has enough time to watch you stream your personality change on national television!

Anyway, Dabi enters the fighting ground and challenges Endeavor while explaining his grudges against his father and the Pro Heroes.

While Dabi’s entry was off, we can expect chapter 291 to highlight some of the memories and backstories of the Todoroki family. In the next chapters, fans can expect a battle between the two most significant fire quirk users, Touya Todoroki and Enji Todoroki.

Source:-   My Hero Academia: Why The Big Dabi Reveal Didn’t Have Any Impact Naoki Urasawa Is Working On A New Anime Adaptation
Categories