Login + Create my blog
Homelander, The Boys, My Hero

Homelander of The Boys and All Might of My Hero Academia both are very crucial characters in their respective universes. Factors like physical setbacks, characterization, worldbuilding set them apart. But there are also important aspects in which they are quite alike. However, regardless of these similarities, All Might does not become a Homelander. Today we look at some of the factors that play a role in his character development that prevent it from happening.

Homelander is an egotistical narcissist, and it is understandable since he has many powers at his disposal that might make even the humblest man a little arrogant. We often hear the words, “Power corrupts, absolute power corrupts absolutely.” Homelander is no exception in this regard. However, All Might is quite humble, but there are several reasons for that. He cannot sustain his hero form ever since he got injured during a fight with All for One, slowly killing him. He can only use his hero form for a certain amount of time, which he saves for confronting villains. When he goes out shopping, it is hard to imagine that he is Hero no. 1, who has been saving the world from villains for decades.

His inability to maintain his true form 24/7 puts a dent in his confidence as he is aware that after a few minutes of action, he will be his usual weak self. On the other hand, Homelander has no such limitations, so he has all the powers at his disposal any time he wants, making him arrogant. 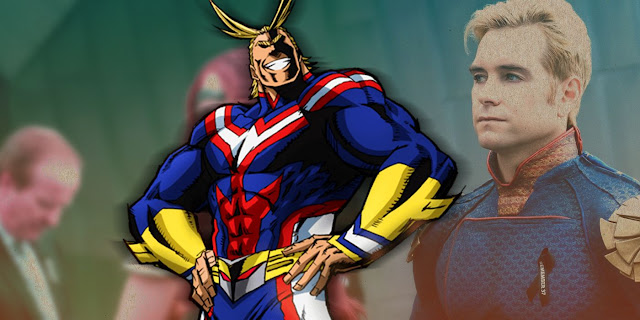 All Might can be seen training and working with the next generation of hero students as a mentor and teacher. He dedicates his time to teaching others about a true hero’s responsibilities, and he is always empathetic to students whenever they make a mistake. He has a father-like presence, especially in the life of Izuku, who struggles to get used to his newly received Quirk, One for All. His selflessness is evident, and even though All for One has given him a life-threatening injury, he never talks about his suffering from anyone. All Might is a hero in the true sense of the word, and even the hero killer Stain recognizes it.

Homelander, on the other hand, can be seen using empathy as a tool of manipulation. He even manipulates his son Ryan, the world’s first natural-born Supe, to use his powers, mostly failing without success. His frustration is evident whenever that happens, but All Might was always patient and sympathetic to the hero students when they struggled with their Quirks. Homelander lacks sympathy about the supposed death of Stormfront and instead reveals his anger. It was a critical moment for him to express sympathy for his son, but he failed to do so.

All Might is the Symbol of Peace for the people of Japan, and he dedicates his entire life to upholding that image. He ensures that whenever a villain attacks, people always have hope that All Might will step up to protect them. He does it without failing for years. Even when he has a life-threatening injury, he fights with All for One and somehow manages to defeat him. All Might put everything on the line to ensure that people had confidence in heroes. In order to ensure this trust is not lost, he passes on his Quirk to Izuku and dedicates his time to train the next generation of heroes by working with the hero students.

Homelander does not have any such life goals in particular. He only is concerned with ensuring that he remains the most valuable asset for Vought. It is almost impossible to imagine him taking a self-sacrificing role like All Might. He can never put his interests after others. He is only interested in furthering his own agenda and ensuring that his influence increases; there is little in him that deserves to be called heroic.

All Might live in a world where 80 percent of the people have some Quirk. People who are born Quirk less are even looked down upon and bullied., like the protagonist Izuku. Quirks play such an important role that people even marry, taking into account the Quirks that the children might inherit, as in Shouto Todoroki’s parents’ case. Like Izuku, All Might was also born Quirkless until he inherited One for All. Although one has to pass an exam and undergo training to become a pro, superpowers are very common in the world of My Hero Academia.

In the Boys, superpowers are acquired when characters are injected with a specific chemical, as in the case of Homelander and other Supes. Since they are rare, unlike in My Hero Academia, they are often seen as gods. As he was raised by doctors in an unloving environment, Homelander grew to become a hateful man. The lack of parental love and care has a long-lasting effect on his character development.

It is evident that All Might and Homelander are a result of the environment they grew up in, and their respective worlds have played a crucial role in the type of hero they have become. Although Homelander is stronger, All Might’s will power can defeat him just like he defeated All for One so many times despite being weaker of the two. But, still, both of them are entertaining characters that leave an indelible mark on the audience.

Source:-   My Hero Academia: What Makes All Might Different from Homelander Third Season of The Boys: Cast and Plot DNS_PROBE_FINISHED_NXDOMAIN: How to Fix this Error Message
How to Reduce Memory Usage in Firefox
How to Switch to Firefox From Chrome
Comment on this post
Newsletter
Follow me
Search
my blogs

Third Season of The Boys: Cast and Plot
Categories