Mads Mikkelsen Might Replace Johnny Depp in the Fantastic Beast 3

According to recent reports, Mads Mikkelsen will be playing the character of Gellert Grindelwald in the upcoming movie Fantastic Beasts 3. The film franchise is going through a significant shakeup from a few weeks.

Mads Mikkelsen is a Danish gymnast, dancer, and actor. He is famous for his characters as Tony in the film franchise Pusher film trilogy (from 1996 to 2004). He also played the role of Detective Sergeant Allan Fischer in a TV show titled, Rejseholdet (run from 2000-2004), Ivan in Adam’s Apples, Niels in Open Hearts (2002), and Jacob Petersen in After the Wedding. 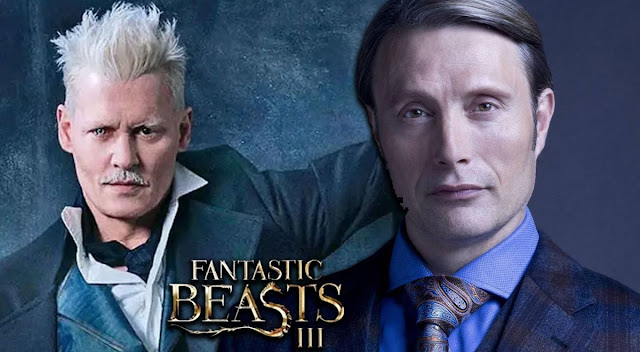 A few weeks ago Johnny Depp and the Warner Bros. studio announced that Depp is leaving the Fantastic Beast franchise. Depp debuted at the end of Fantastic Beasts and Where to Find Them as the Dark Wizard and played the role of the main villain in Fantastic Beasts: The Crimes of Grindelwald.

The exit of Johnny Depp created this biggest question as to who will play a role in his replacement. Warner Bros. confirmed that the studio would recast the character and the fans of the franchise started the speculation who would be best for the part in the replacement of the talented Depp. Many audiences even wanted to see Colin Farrell in the role of Grindelwald, as he played the character in his first Percival Graves form.

Mikkelsen started his career in the internationally successful film Pusher in the role of a dealer. He later played the lead role as Lenny in the film Bleeder directed by Nicolas Winding Refn. Mikkelsen featured opposite Kim Bodnia, who suffers from an avoidant personality disorder.

According to the recent report of Deadline, Mikkelsen is the best choice for Depp’s replacement as Grindelwald in Fantastic Beasts 3.

David Yates directs the third installment of the film, and Steve Kloves and J. K. Rowling wrote the screenplay. And in an early talk with filmmaker David Yates, he shared that Mikkelsen is one of his favorite actors. However, Mikkelsen has not yet been signed for the part but since the film’s director is such a big fan of the actor’s work, Warner Bros. is working to approach him and lock him for the character.

The shooting of the project was planned to begin in early 2020, but due to the pandemic, Warner Bros. has to postpone the production. The filming then shifted to begin from September 2020, and the release date was decided for 12 November 2021. Now since Johnny Depp left the project, leaving the role of Gellert Grindelwald to be recast, the release date of the movie was pushed back to 15 July 2022.

Warner Bros. announced the film franchise would create a trilogy in October 2014. In 2016 director David Yates shared that JK Rowling has some great ideas for the third screenplay. And Johnny Depp joined the project in 2018. However, the allegation of Depp is the reason Warner Bros. asked him to leave the franchise.

The Danish actor, Mikkelsen, is best known for his antagonist characters in various small or big-budget projects. He recently portrayed the role of Kaecilius, an evil sorcerer in the movie Doctor Strange. So now, playing the character of Grindelwald will not be a problem for him. The amazing actor broke the type-casting method of the industry and played Galen Erso in Rogue One: A Star Wars Story. Mikkelsen’s past experiences indeed prove that he will be the choice for Grindelwald.

Depp was undeniably amazing in the role of Grindelwald; however, watching Mikkelsen in character will surely be delighted by how the actor will add more layers to the character. Both actors have their respective fan base. For years Depp has created his unique places in fan’s hearts playing the goofy pirate Jack Sparrow in Pirates of the Caribbean.

Hopefully, Warner Bros. will be able to successfully close the deal with Mikkelsen, and soon the fans will see him in the role of Grindelwald. Give a Tough Fight to Your Friends in ‘Pokemon Sword and Shield
How to Reflect Your Activity Levels with Apple Watch
Pokemon Crown Tundra: How to Find and Catch Crobat
Comment on this post
Newsletter
Follow me
Search
my blogs