You must have come across various situations where you heard a song and fell in love with it instantly. You tried to find it everywhere, but couldn’t get your hands on it. Don’t worry; we got you covered. Stay tuned for some of the best mobile and web applications you can use for song identification. Next time, you hear a song and want to know which song is that, just open the song identification app, and it will tell you the song details in seconds.

This must be a surprise for many people, as Google Assistant is not generally known for song identification features. For Android users, Google Assistant is one of the best ways to identify songs. All you need to do is just pull out your phone, and say “Hey Google, what is this song”/ Identify this song” and Google will start hearing the music, and within a few seconds, it will give you the outcomes. Along with song details, you can also access the playable links of that song from different streaming services. The only downfall of Google Assistant here is that iOS users cannot access it.

If you don’t want to use Google Assistant for song identification, there is another simple and straightforward way by which you can identify a song which is also known as “Widgets.” Open “Widgets” by pressing on your home screen and click on the “Sound Search.” Drag and drop the widget on your home screen, and you can use it to identify a song in the future. All you need to do is just tap on the widget, and it will identify the song within seconds.

For Pixel users, Google will automatically identify a song. New Pixel devices come with an in-built “Now Playing” feature that tracks music when you are offline. It will give you a notification with the current playing song details, and you can save it or discard it as per your choice.

With recently improved capabilities and Shortcuts support, Siri is growing as one of the most promising automation tools. Siri comes with multiple features, and song identification is one of those features that allows you to identify songs and music in seconds.

Whenever you want to identify a song, launch “Siri” and say “What song is playing right now” and Siri will start listening to the song and display results in seconds. You can click on the results to play the music in Apple music. In case you have not subscribed to Apple Music, you will get the option to purchase the song.

Cortana allows you to identify music on your PC. Cortana is a Microsoft powered voice assistant that identifies playing songs with just a single command. All you need to say is “What song is playing” and it will start listening to the song and display results in seconds. Cortana is now available as a separate app on Windows 10. Android and iOS users can also access Cortana.

Alexa needs no introduction as it is another popular voice assistant with decent song recognition features. Currently, Alexa can recognize songs only when you play music from Amazon Music. Alexa is a great voice assistant for you if you are neck-deep into Amazon’s ecosystem. Before using this feature, make sure you enable the Song ID feature. All you need to say is “Alexa, turn on song ID”, and you can use Alexa for song identification purposes.

Shazam is one of the most popular apps to identify music quickly. Shazam is available for both Android and iOS users. Shazam is one of the few apps that identify songs with no failed attempts. Along with song recognition, you also get lyrics so you can sing along. If you don’t want to use any AI for song recognition, then Shazam is the best app you can get your hands on. One of the most outstanding features of Shazam is that it even remembers the recognized songs, and you can also access it offline. 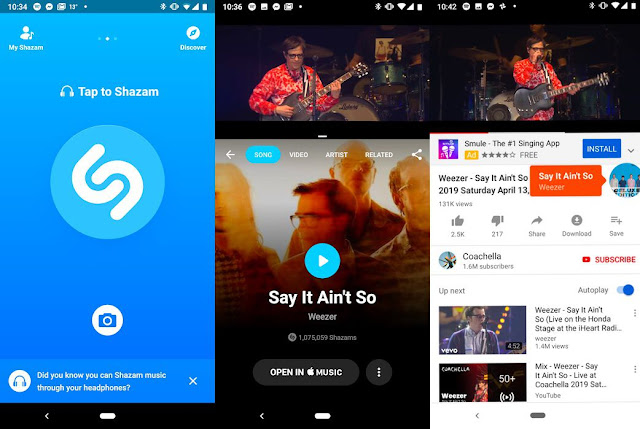 It records the audio and shows you the song information when you come back online. Just like the Pixel “Now Playing” feature, it also gives notification with the song details playing around you.

Another outstanding feature of Shazam is that it can recognize the song playing on your smartphone. The feature is also known as “Pop Up Shazam”, and it works on multiple apps. You can also use Shazam Lite if you have a low- powered device. Shazam Lite is equally capable because of the same music recognition algorithm.

With all the five options mentioned above, you can pick one which suits you to recognize music on the go. Some apps are even capable enough to identify your humming. The AI-powered voice assistants eliminate the needs of any third-party application. But Shazam is a very potential app with advanced algorithms that can identify songs in minutes with no fail. Some honorable mentions are SoundHound, Midomi, and AHA, which are equally capable of identifying songs and music playing around you. Lenovo Smart Clock With Google Assistant: The Clock Gets Voice Lenovo Smart Clock With Google Assistant: The Clock Gets Voice

Here is How to Uninstall Cortana
Categories