On September 10, Microsoft launched its Surface Duo Dual-Screen smartphone powered by a modified version of Google’s Android software. It has a foldable design that looks like two mini tablets. Its two 5.6-inch OLED screens together form an 8.1-inch display, 9.9mm thickness, and weighs 8.8 ounces. The device costs $1,399 for 128GB of storage. Overall the gadget looks like a tiny notepad made of metal and glass. It seems like Microsoft is following the dual-screen phone trend as Samsung and Motorola have also understood the potential of a dual-screen gadget.

Some time ago, Microsoft had promised to reinvent dual-screen computers, and it seems like Surface Duo is their way of reinvention. In 2021, Microsoft will launch another smartphone called Surface Neo, and it will probably be a better version of the Surface Duo.

We are in the middle of the pandemic, where the online world and the requirement of a robust smart gadget are prominent. The company might be inspired by the amount of online space, multi-tasking, and phone storage we require, and thus, they created the Surface Duo. Our smartphones are often overburdened with the work, multi-tasking, space requirement, etc. that our phones give up before their life expectancy. If you switch between different screens quite often to stay active at online working, then a phone like Surface Duo might prove beneficial for you.

But for the rest of the population, let’s figure out if the Surface Duo is worth your money or if it is a technological upgrade that no one needs. 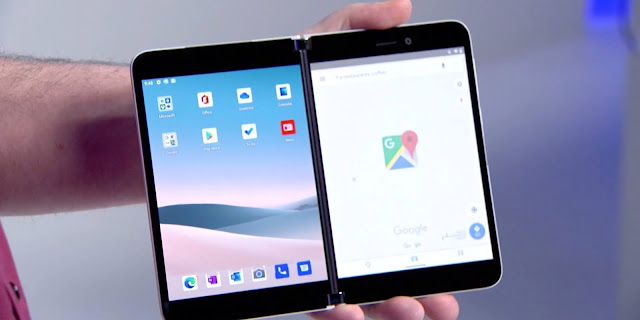 Why do we need two screens?

As per the research, it turns out that Microsoft’s Surface Duo team believes that two screens will increase productivity, and they treat this dual-screen like using a portable pair of monitors. The Surface Duo aims at offering a work-friendly environment on the device while making the procedure easy to use and comfortable. The display screens are separated rather than divided as it will allow the glass to be durable and work smoothly with the Microsoft Pen. The pen is safe to use on the Surface Duo.

The Surface Duo has two 5.6-inch OLED display screens with a 4:3 aspect ratio, showing the documents in a large font. People who find it difficult to read on a single screen smartphone will find it easier to read the documents and web pages on it, and it won’t strain their eyes either. Also, it will feel like you are working on a mini laptop or a tablet. The dual-display of the 5.6-inch screens form an 8.1-inch display, which will be ideal for watching movies and other videos.

Each half of the Surface Duo has an accelerometer, gyroscope, and proximity sensor that detects the phone’s position and shows the apps from screen to screen. Note that all the apps cannot split into two screens together. Only Microsoft’s core productivity apps, including Outlook, Word, and OneNote, work in the dual-display mode. These apps can recognize each other, which enables it to share information between apps in seconds. It is quite similar to using drag-and-drop on an iPad.

Unfortunately, the Android apps don’t work like that on the Surface Duo. Currently, only a few third-party apps are being picked to create a Duo-optimized dual-screen Android version. Whatever the results may be, it will set a benchmark and a stepping stone for the Surface Neo smartphone. Surface Duo can determine how the company wants its Surface Neo to have in its specs.

Microsoft could not bring a 5G connection with a 4.8mm design, as the world is far away from that type of technology. The Surface Duo doesn’t have Wi-Fi 6 either. Microsoft compromised on these specs to offer a good-quality screen. The company has focused on display quality, hinge mechanisms, device size, and battery life. The gadget has a split battery and custom processors, which is unique on its own.

The Surface Duo’s camera is not as impressive as the screen. It is surprising to see that it has similar camera features like any other smartphone. Despite having two screens, it only features one 11-megapixel camera inside, which will act as an external camera if you flip the phone’s display. The f2.0 camera has AI and portrait mode, allowing you to shoot 4K videos at 30 and 60fps with HDR. You can also capture slow-motion videos. It is also disappointing that it doesn’t have any optical image stabilization or any specific zoom step-up and focus features like the ones available in other smartphones.

These features will help you determine if you want to spend your money on Surface Duo or not. Note that the device is protected with Corning’s Gorilla Glass 5, but Microsoft has not made any claims on the drop test reliability yet. LG Wing: Display, Performance, And Other Things to Know
Third Season of The Boys: Cast and Plot
Want to use WhatsApp with premium features? Check out all the hacks we have for you
Comment on this post
Newsletter
Follow me
Search
my blogs

LG Wing: Display, Performance, And Other Things to Know