The 100 Recap: Crucial Instances When Clarke and Bellamy Teamed Up

Two protagonists of the post-apocalyptic CW drama series “The 100” weren’t exactly like best buddies all the time. In fact, they started out as rivals before becoming pals. They have been through landslides after landslides, and the dynamics of their relationship is a work of art. They can understand each other, they can fight against each other; and when the time is generous towards them, they can make each other win.

But one thing is a certainty-when their skills and courage are combined, the duo is unbeatable.

So, here are the instances when the two hearts of the story Clarke Griffin (played by Eliza Taylor) and Bellamy Blake (played by Bob Morley) teamed up together big time.

The Force that Binds Them all

At the end of the season, we see the duo at the peak of their leadership, especially when they join hands to keep Grounders away from the delinquents. The duo forget their differences after the death of Charlotte and agree that both of their priorities converge on the point that leads to the safety and unity of the survivors.

At the end of the season, the duo helps the “100” in understanding each other and in realizing that their best interest is in helping each other. 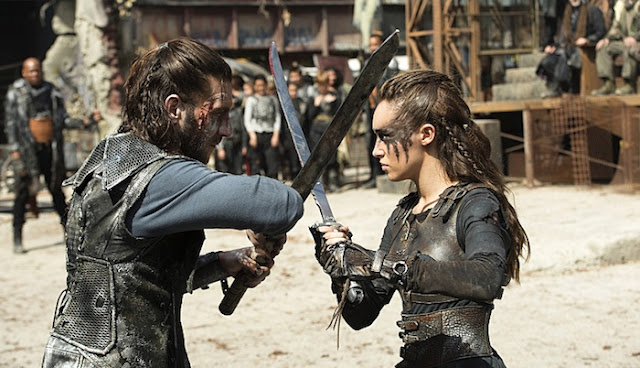 Destroying the Cruelty of A.L.I.E.

It was high time, and Clarke and Bellamy had to forget about their conflict involving Pike and Lexa. A.L.I.E. was becoming mighty powerful at the end of Season 3 because Jaha had been providing her with chips that gave her superpower to gain control of everyone’s mind.

With all the hope dying away and everyone coming under the grip of A.L.I.E. It was Clarke, Bellamy, Octavia, Raven, and Monty that came together to form a defying resistance against the menacing cruelty.

The final blow was given by Clarke when she confronted A.L.I.E. on the Flame and on the City of Light. Bellamy stood his ground in reality, protecting Clarke’s body.

When Clarke and Bellamy found out the reality about Mount Weather and the horror behind the scenes, they became petrified. Being heroes of the world, they couldn’t tolerate the fact that grounders were being locked up in their cages and were drained of their blood. So, both of them formulated a plan, the first step of it was for Bellamy to get inside Mount Weather as an inside man.

They talked to each other on the radio during the entire mission, but their clever understanding of the situation becomes clear at the end when they don’t dispute on whether or not they should pull the trigger.

The duo again showed maturity and showed that they do not possess any stupid ego in the face of impending danger. Clarke and Bellamy become acquaintances once again, forgiving each other’s past mistakes and quickly sets upon on their quest for survival against an apocalyptic Praimfaya.

Furthermore, the possibility of a conflict was less because everyone understood that if they don’t work together, Praimfaya will kill them all.

At the end of Season 6, Monty said his goodbye to Clarke, Bellamy and the rest of the group and wished that all of them would do better in the future.

Despite the duo’s die-trying efforts, people were still dying, and the group was getting thinner and thinner. The message compels the duo to look each other in the eye and feel the helplessness that is pervading between them. They couldn’t help but ask themselves-‘are they doing better?’

All the seven seasons are currently available to view on Netflix.

Source:-  The 100 Recap: Crucial Instances When Clarke and Bellamy Teamed Up Sophia Loren and Her Son Returning With Netflix’s The Life Ahead
These Are the Best Hard Drives You Can Find to Store Pictures
Nintendo Removes Harv’s Fences and Many Other Items From Animal Crossing: New Horizons
Comment on this post
Newsletter
Follow me
Search
my blogs