Yes, even though this anthology series travels through that same pandemic-era cliché route of how people are coping up in these unprecedented times.

It’s a video conferencing series (remotely produced) created by Hilary Weisman Graham which tackles the kind of problems that an ordinary human has faced in the pandemic era. It’s a new addition to the list of movies produced during the pandemic months.

In the opening scene of the series, we see a shot of the barbershop and a date at the middle of the screen-“April  2, 2020.”

Then we shift to a zoom screen where Mike Colter is having a conversation about how peaceful he was in the lockdown up until the point where everything just fell apart.

This is the first episode we are talking about, and it is about Ike, a barbershop owner, who is living alone because he has recently broken up with his girlfriend. He explains his situation in the AA meeting happening through a Zoom call where he says that apart from being sober for 18 months, there is nothing that is going well for him. His business is closed, his girlfriend has left him, and now he has no idea what he should do with his life. He calls his friend and regrets it immediately because that reminds him of his drinking days. Finally, when his sponsor asks him to make most of his time, he decides to make himself popular by posting photos of himself and his potted fern. 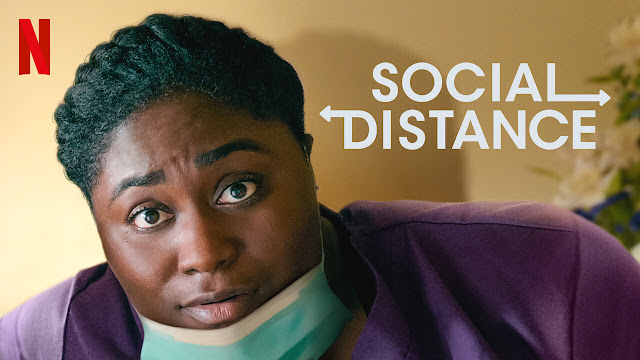 This was the first episode, the next one was about a family drama, a senior man in the family has died, and three siblings are arguing with each until uncle Tony (Miguel Sandoval) steps in and says something. The third episode was about a mother named  Imani, who has to watch her daughter and take care of a paralyzed woman at the same time. When the paralyzed woman’s poetry professor daughter keeps giving reasons for not visiting, Imani makes an innovative arrangement.

You may watch the series, especially its first three episodes because of its funny jokes. The creators have refrained from using hackneyed lines in the dialogues and decided to use the crisis as an accepted reality rather than debilitating consternation. The one criticism that echoed from the series was its lack of involvement in the sentimental scenes, especially the time when Mike Colter is going deep into his psychology. Some may feel a shade of sympathy for him, but there wasn’t enough pull-in factor. T

However, all the actors do create a light-hearted environment which might get you through with all the episodes.

I would recommend you to stream an episode and see if you like these kinds of stories. Since this is an anthological tale, there is no need to be worried about the continuity of the plot. It doesn’t matter whether you click on episode 1 or episode3, you will always begin a new chapter.

I hope the next episodes focus on the funny stuff rather than striving to get viewers all teary-eyed. Everybody is suffering, we all know that now let’s just get on with it.

Source:-  Should You Watch “Social Distance” on Netflix? Avatar: The Female Writer Who Is Responsible for the Series’ Best Standalone Episodes
Categories