Recently, Boruto’s Team 7 is going through a tough time both in the manga and the anime. Boruto: Naruto Next Generations has been giving a lot of clues that Boruto has a challenging time ahead of him. However, the daughter of Sakura and Sasuke Uchiha has stepped up time and time again. In a recent novel of the series, Sarada has proved her ability to use Three Tomoe Sharingan. Although recently the Kara organization has been too good for Team 7, and they have struggled to compete with their arch-enemies. However, Sarada is undergoing intense training with Naruto to prepare for the next battle with them.

The recent novel named Sasuke’s Story: Star Pupil recounts the story of the last member of the Uchiha Clan and his daughter Sarada. Sasuke can be seen working hard with his daughter to prepare her for the troubles she will have to face in the future. At her age, he recalls that he used to be engulfed in hatred and wanted revenge on his brother Itachi who had caused the death of his clan. His resentment has taken over his thoughts, and he ended up joining Orochimaru. However, much later, he did realize how wrong he has been and finally learnt that he was unfair to himself. Ultimately, he found a place in the Hidden Leaf Village, Konoha, where he learnt to let go of his past. 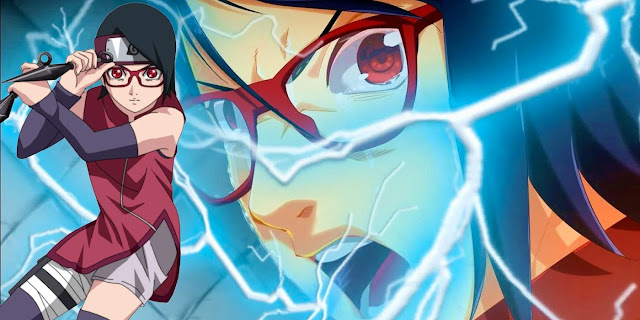 Recently one of the Boruto fans has pointed out how Sarada was able to get access to the 3 Tomoe Sharingan. It allowed her to read the movements of the opponents and copy their jutsu as well. The fan points out Sasuke was always behind her, teaching her to have faith in her abilities as later she used the 3 Tomoe Sharingan in a fight against Boro in the novel. We now know that her father has played a considerable role in her development, and the novel ensures the fans know the struggles that she has been through.

When she was given the leadership of Team 7 for some time in the manga, she showed everyone what she was capable of. It was not only about her Sharingan powers, but her captaincy of the team was quite impressive as they confronted the Kara Organization. Sarada is surprisingly not involved in the current battle as Naruto, Sasuke and Boruto take on the Kara Organization and Jigen. However, it seems likely that she would get involved some way or the other before the battle ends. When she fights alongside Sasuke, she will be even more motivated to do well and prove her abilities. Her recent mastery of the Sharingan has already surprised many, can we hope to see something else that we are not expecting from her?

Source:-    Sarada’s Mastery of Upgraded Sharingan and Sasuke’s Role in Her Recent Development How to Connect 2 Pairs of AirPods to One Mobile Simultaneously
Samsung Galaxy Watch 3: All You Need to Know
Steps to Use Bullet Points for Readability in Emails
Comment on this post
Newsletter
Follow me
Search
my blogs

Naoki Urasawa Is Working On A New Anime Adaptation
Categories