Sometimes, comedy is all we want to watch to feel pleasure in the absurdity of life. Humour is one of the most popular genres around the world. The humorous movie helps you to forget the unpleasantness of life and the outside world.

My Spy is one such film, and it combines comedy with the spy genre or tough guy out of the water genre. Peter Segal directed the movie, and Erich and Jon Hoeber write it. The plot follows a CIA agent who is at the mercy of a nine-year-old girl of a family that his tech support is surveilling being undercover. My Spy theatrically was released on 9 January 2020 in Australia by STX Entertainment. And the distribution rights of the film were bought by Amazon Studios due to the global pandemic COVID-19. The film was released on Prime Video on 26 June 2020 and received a mixed response from critics.

Kristen Schaal, Dave Bautista, Chloe Coleman, Ken Jeong, and Parisa Fitz-Henley were the cast of the movie My Spy. Although since it was a family movie, it did not get a positive response from the audience and critics. It received an approval rating of 47% based on 118 reviews on rotten Tomatoes with an average rating of 5.3/10. 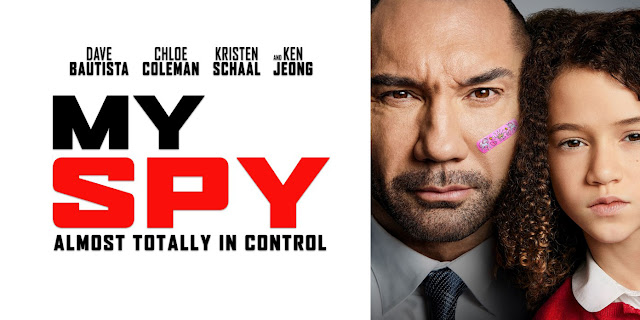 Fans of My Spy can not get over the film, and hence we have prepared a list of few movies in similar genre-bending or films starring Dave Bautista.

Johnny English also is known as “Little Brother of James Bond” is a spy action comedy movie written by William Davies, Neal Purvis, and Robert Wade, directed by Peter Howitt. Rowan Atkinson is in the title role along with other actors including Ben Miller, Natalie Imbruglia, and John Malkovich are in the supporting roles.

Rowan Atkinson is known for his fantastic character for years as Mr. Bean, and he took on the role of Johnny English as a British secret agent. In the movie, he is a well-intentioned, kind-hearted, and clumsy man who accidentally becomes an undercover agent at M17 because he, unfortunately, caused the death of all other agents.

Atkinson tried to be a James Bond, and Johnny is like Inspector Clouseau. He made his way through it, and he has a bit of sheer luck which allows him to succeed on the mission. The movie was a commercial success and got an approval rating of 33% based on 121 reviews on Rotten Tomatoes.

Agent Cody Banks is a spy comedy movie directed by Harald Zwart. The plot follows a 15-year-old title character played by the actor Frankie Muniz. Muniz is known for his TV show Malcolm in the Middle, Agent Cody Banks, Big Fat Liar, and Racing Stripes. He was nominated for two Golden Globe Awards and one Emmy Award nomination. Along with Muniz, Keith David, Angie Harmon, Ian McShane, Hilary Duff, Cynthia Stevenson, and many more actors for other supporting characters.

However, the movie is not much about the mission rather about the inability to speak with girls. Throughout the film, Cody is helped by CIA experts to do his homework, teach him how to debonair with the girls, and complete his chores.

Agent Cody Banks got mixed reviews and an approval rating of 33% on Rotten Tomatoes. On 12 March 2004 the sequel of the film was released titled, Agent Cody Banks:2.

The plot of the story revolves around the Secret agent WD-40 Dick Steele played by Leslie Nielsen. Along with the lovely and mysterious Veronique Ukrinsky, Agent 3.14 played by Nicollette Sheridan. Secret agent WD-40 must rescue Barbara Dahl, who is kidnapped and he wants to stop the evil genius, Rancor played by Andy Griffith.

Leslie Nielsen is a Canadian comedian, actor, and producer. He is known for his notable performances in The Poseidon Adventure, Forbidden Planet, Airplane, TV show Police Squad, etc. and his character’s goal in the movie was to save the world from Rancor. However, the movie did not get a positive response from the audience and critics. The film earned an approval rating of 8% based on 40 reviews on Rotten Tomatoes.

Spies in Disguise is an American computer-animated spy comedy movie produced by Blue Sky Studios. The voice to the film was given by some amazing actors including Tom Holland, Will Smith, Ben Mendelson, Reba McEntire, Karen Gillan, Masi Oka, DJ Khaled, and Rashida Jones.

The screenplay of the plot follows the secret agent who is transformed into a pigeon by a young scientist named Holland. The two then worked together to stop a cybernetic terrorist, and return to his human form.

Spies in Disguise premiered on 4 December 2019 at the El Capitan Theatre and collected a gross of $171 million worldwide and received positive reviews from critics with praise for music, humor, animation, and vocal performances.

The computer animation movie is a family-friendly story about a teen and voiced by Holland. Along with the release of Spies in Disguise during Christmas, Rise of Skywalker and Little Women also released at the same time, and hence it had to suffer a bit at the box office. The fans can find its DVD and the movie is also available on streaming platforms now.

The above are new films that you might watch if you like My Spy and have a good time with your family and friends.

Source:-   Films To Watch If You Love My Spy The Zombies of Army of the Dead Are 90% Practical
Fortnite: How to Use Wolverine’s Healing Power
Some Best Philips Hue Apps for Android
Comment on this post
Newsletter
Follow me
Search
my blogs

How to Watch the Oscar-Winning Movie “Parasite” Online?
Categories