Microsoft had this aim to redefine the offices, the physical workspaces in which businesses run. And it took the first step and came out with the Surface Hub 2S. The company recently unveiled its huge 85-inch Surface Hub 2S, aimed at large enterprise businesses. This came three years after the launch of the first-generation Microsoft Surface Hub, a massive business-focused collaboration device that is somewhere in between a smart TV and a giant tablet. Microsoft formally unleashed its first major upgrade, the Surface Hub 2S 85-inch, which has begun pre-sales and will be available in January. The massive 85-inch model is available for $2199. 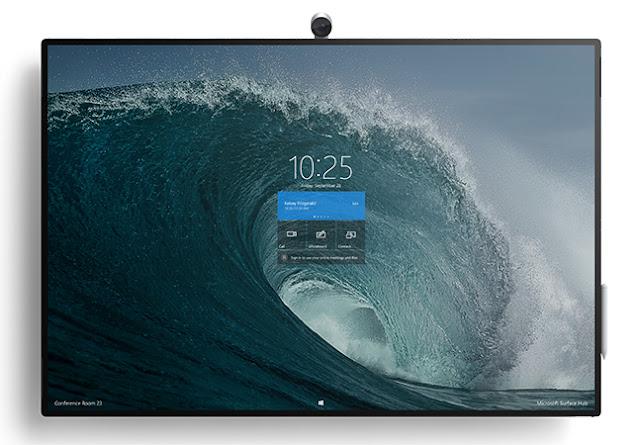 The huge screen is mounted to an exceptional rolling stand built by a steel case. A section in the center of the stand contains a custom battery from APC and a power cord. You can unplug the cord to easily wheel around the Hub 2S out of the conference room to any desk in the office. All of this makes it easier to collaborate with the Hub.

Microsoft’s second-generation model comes with the same built-in apps and software as in first-generation, including Windows 10, Office 365, Microsoft Teams, and the Microsoft Whiteboard app. The major upgrades in the Surface Hub 2S are in its hardware and specifications. According to Microsoft, the 50-inch model is 40 percent lighter at 61.6 pounds, making it easier to move around. It has also got a 4K display plus, multi-touch display, and 50 percent faster graphic performance with an eighth-generation Intel i5 processor.

It also has a 4K built-in wide-angle camera clipped to the top of the unit that is specifically designed for large boardroom meetings. This camera could be detached and moved to any side of the screen and also flips back out of the way to ensure it doesn’t break when you wheel the Surface Hub through the door frame.

The Surface Hub 2 Pens are substantially larger than standard Pro Pens, as they have been designed for whiteboards. Also, you must note that the Surface Hub 2S is not a personal computer, so you will have to sign in and out each time you use the device. The device itself does not keep any of your files, as it wipes everything clean after each use. So, you need to be accessing your files via OneDrive or USB. In the times of coronavirus pandemic, where the work landscape is changing with more people working from home, a tool like Surface Hub 2S can be a boon. Is buying a Surface Hub 2S 85-inch worth it? Absolutely. It adds a large amount of value to your business in the form of customer experience, collaboration, flexibility, and time-saving. Guide to Improve Security Shield in Microsoft Defender
Want to Delete a User on Mac? Here’s How to Do It.
Money Heist: Will Alicia Join The Robbers In Season 5?
Comment on this post
Newsletter
Follow me
Search
my blogs

These Are the Best Cases for Motorola Moto G8 Plus

Bluetooth Connected But No Sound? Here are the Fixes