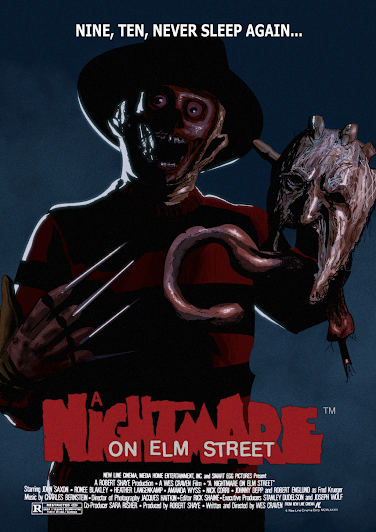 A Nightmare On Elm Street is a franchise of horror, but the first movie was the best one. It is an American slasher film and was released in 1984. The movie was written by Wes Craven and produced by Robert Shaye. It stars Heather Langenkamp, Robert Englund, Johnny Depp, John Saxon, and Ronee Blakley. The plot starts with Tina Gray waking up from a nightmare, where she is chased by a man in a boiler room with a blade-fixed glove. The next morning, Tina was consoled by her best friend, Nancy, and Glen. But Tina’s boyfriend, Rod, interrupts their sleepover. When Tina fell asleep, she again witnessed the same nightmare. The next morning Nancy’s father arrests Rod, despite his innocence.

A Nightmare On Elm Street depicts a group of parents terrified by a pedophile named Freddy Kreuger. And they are ready to do anything to protect their kid. The plot of the story is very relevant in today’s society. Parents always keep their eyes on their children, especially when online, as online could be very dangerous if not used cautiously.

Halloween is an American slasher movie directed by John Carpenter, who also co-wrote the screenplay with producer Debra Hill. The film’s plot revolves around the person with a mental health condition who had murdered his teenage sister on Halloween night when he was just six years old. After fifteen years, he returns to his hometown and stalks a female babysitter and her friend. Jamie Lee Curtis played the character of a female babysitter.

The movie is incredible and well suited to today’s “stranger danger” concept. The film did a gross collection of $70 million. Another sequel of the franchise is scheduled to release on 15 October 2021.

Candyman is an American horror movie directed and written by Bernard Rose. The story is based on the short story titled The Forbidden, written by Clive Barker. The film’s plot follows a student in Chicago and completing a thesis on Urban Legends, which leads her to a ghost of an artist and slave named “Candyman.” He was murdered in the 19th century for his relationship with the daughter of a painter because it was forbidden for a slave’s son to love a white woman.

Candyman was released on 16 October 1992 by PolyGram Filmed Entertainment and TriStar Pictures. The film collected a gross of $25 million in the United States. It received an average score of 61 out of 100 based on 15 critics on Metacritic. On CinemaScore, audiences gave an average grade of “C+” on an A+ scale to F.

Friday the 13th is an American slasher movie directed and produced by Sean S. Cunningham, and screenplay written by Victor Miller. It stars Adrienne King, Harry Crosby, Betsy Palmer, Mark Nelson, Jeannine Taylor, and Kevin Bacon. The movie was released on 9 May 1980 and collected a gross of $59.8 million. Friday The 13th received praise from both audiences and critics. The plot set in 1958; Claudette Hayes and Barry Jackson sneak inside a cabin to have sex, where an assailant murdered them. After twenty-one years, the counselor of Camp Crystal Lake is driven to open the place; she was warned that the place is badly reputed for a boy drawing in the crystal lake. Later, an unseen person slashed her throat after chasing her in the woods.

People always worry about teens partying and having sex, especially in summer camps, without any supervision. And the way the teens treated Jason Voorhees was heartbreaking. Although, no one has any sympathy towards Voorhees for killing so many people.

The Silence of the Lambs is an American psychological horror screenplay written by Ted Tally and directed by Jonathan Demme. The story is adapted from a novel of the same name written by author Thomas Harris’. The movie stars Jodie Foster, a young FBI trainee named Clarice Starling. Anthony Hopkins played the character of Lecter, and Ted Levine played the character of Bill. The Lamb’s Silence was released on 14 February 1991 and collected a gross of over $272.7 million against the budget of $19 million. It was the fifth-highest-grossing movie of 1991 worldwide. The film’s plot starts with an FBI agent, Clarice Starling, who completed her training from Quantico, Virginia FBI Academy. She is assigned to interview a cannibalistic serial killer, whose insight could be useful in the case of psychopath serial killer, “Buffalo Bill.” Buffalo Bill used to kill young women and remove their skin.

The movie created fascination about serial killers and crime in general. Many shows and series are exploring the same genre.

Black Christmas, which is titled, initially Silent Night, Evil Night, was released in 1974. Directed and produced by Bob Clark and written by A. Roy Moore. It stars Keir Dullea, Olivia Hussey, Margot Kidder, John Saxon, Lynne Griffin, and Marian Waldman. The story’s plot revolves around a group of sorority sisters who receive unknown threatening calls, and they are also stalked. Then they are killed by the killer during the Christmas season. There are two more movies in the Black Christmas franchise in 2006 and 2019. In today’s world, people hear more such cases of sororities and even more disturbing behavior. The 2019’s version of the movie also involved the feminist element of the story.

The above are a few lists of movies that depict today’s life and society. So if you are looking for some good horror movies to relate to the recent times, then you might find something for you. I hope you enjoyed the article.